What are some less-than-desirable innovations you’ve noticed in modern hotels? 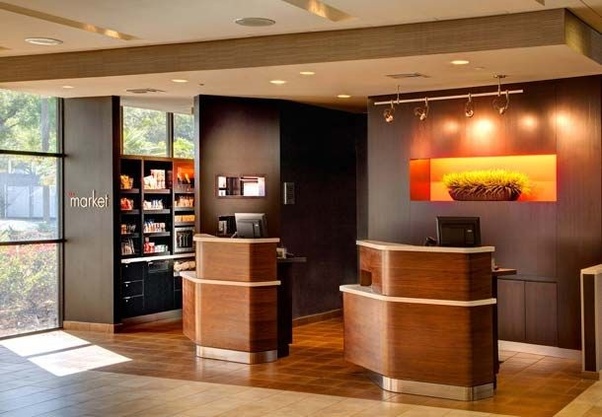 You’d think if you’re making an $8–10mil investment in a new hotel, you can tell the architect, builder or brand rep, pound sand, we’re going to stick to what works. But if it’s a new construction brand with that part of the design as a brand standard, you’re stuck with it. 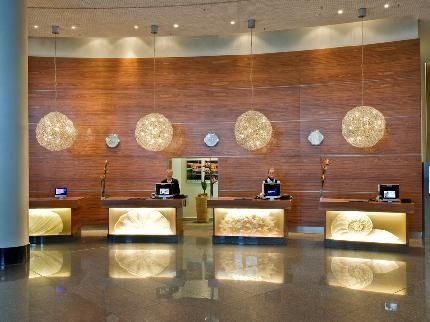 I can understand why they wanted to go with something different. Historically, not a whole lot of work or planning has gone into front desk design in hotels. The front desk was basically a four-foot high countertop, with work surface, recordkeeping and storage faciities on the side facing the clerk.

If you’re checking into a hotel, your first stop is at a counter about the height of a judge’s bench in a courtroom, or the ‘service’ counter at the DMV. It’s disempowering. You’re approaching a counter from which emanates a lot of power and authority and one-sided discretion, but from which you don’t really expect caring service. It lacks warmth: the clerk is dealing with you behind a large physical barrier.

But the solution they came up was not altogether good.
The ‘pod’-type desk – if you can call a fixture not much larger than a speakers’ podium a ‘desk’ – was an attempt to make the customer-facing front office space a little more open, maybe a little more warm, and more appealing and inviting (if you consider a front desk that's designed and decorated much like the set of a game show on TV more appealing and inviting). But it sacrificed very badly on functionality and security. It gives you the impression that the clerk is allowed very limited resources — even counter space — with which to work with you or assist you. And instead of transmitting to the guest a feeling of disempowerment, it shifts that feeling over to the clerk, as well as a feeling of exposure and vulnerability. (And that’s before we even go there about how it doesn’t amount to altogether good security.) 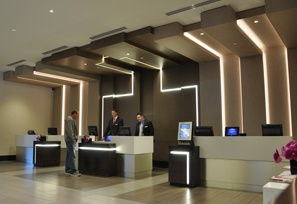 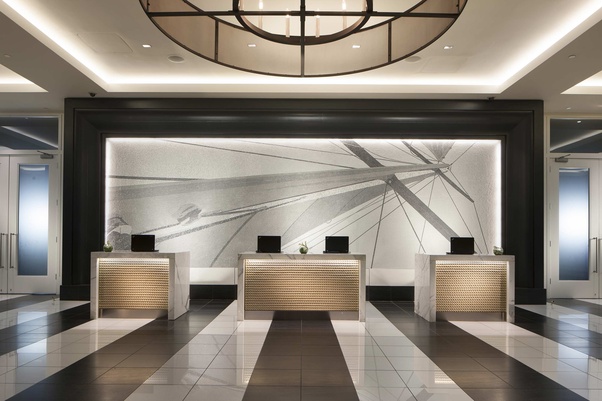 If I know exactly where to hit that design concept exactly where it will hurt, it’s because I was an architectural technology major in college. But the silver lining in that is that, unlike these interior decorators who have little to no regard to functionality who came up with it, I have an idea how to fix it.

If you want to offer more warmth, intimacy, and guest comfort at the registration point, and yet preserve functionality for the clerks, consider this: why not a ‘sit-down’ front desk? 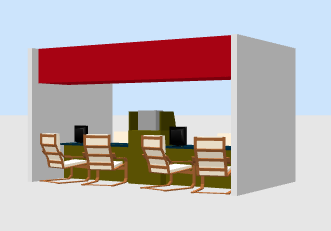 Why not have the ‘front desk’ actually be a desk? This would create the intimacy sought by the ‘pod’ design, without occurring at the cost of functionality or security.

It also invites the guest to be seated comfortably with the clerk as he or she is registering. Our design includes – in addition to the obvious office chair for the clerk – a pair of good office chairs for the incoming guests. 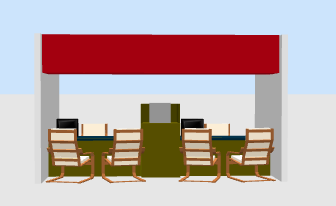 And get comfortable with a cup of coffee while you’re there.

We use the old-fashioned ‘registration card’, even though we have to retrofit an old-fashioned ‘room rack’ for them. Unfortunately, that rack requires a section of counter that is of more conventional height.

So, since we took on a radical redesign of the mark-one-mod-zero hotel front desk, since we were going to end up with this big tall section in the middle of the desk anyway, and since this first occurred for a hotel with a brand that prides itself on its enhanced coffee service in the common areas, we made it a coffee bar on the guest-facing side, complete with a brewer/dispenser in the middle (it’s not drawn out in too much detail in the picture above, but it’s there). 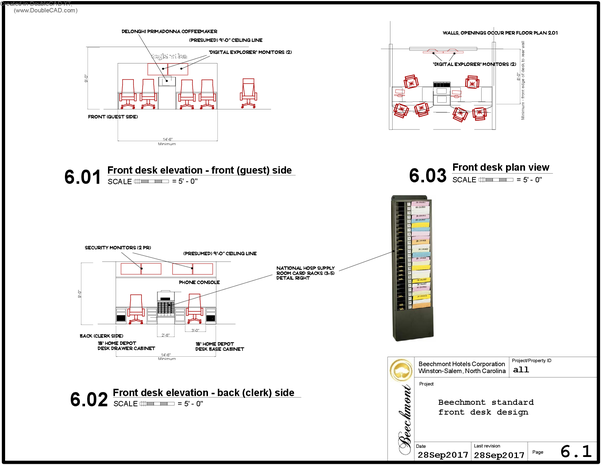 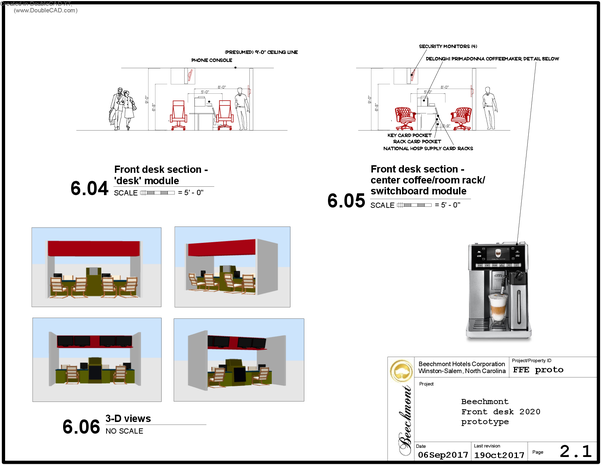 In any hotel, the front desk is the control center, the 'cockpit', the 'quarterdeck', from which the hotel is managed. That lowly, humble, unassuming “$10-an-hour hotel clerk” you find sitting or standing behind it is — like it or not — the person who runs the hotel. Really. I may be the general manager but 40% to 90% of what I do involves responding in some way to what the person behind that desk tells me, or what's contained in a report that he or she (especially if it's a night auditor) prints out. When I'm home in bed, that's who's in charge, much the same as a watch officer in the military. Everything that happens in a hotel is, at least to some degree, managed from behind that desk.

Including security. Common areas throughout the hotel are video-monitored from the front desk. Viewing the overhead monitors from a standing position behind a linear or ‘pod’-type desk comes pretty naturally, but a challenge with which we were confronted involved viewing the monitors from a seated position.

This opened up another opportunity.

You can look up at an overhead video monitor without craning your head excessively if you’re seated about five feet from where it is mounted over a 6’-8” cased opening (the standard upper edge of a window or door).

But your desk is only going to be 3’-3” across. (We had to make it narrow enough so that the clerk and the guest can hand things back and forth without a lot of reaching, yet wide enough that there is adequate work surface, personal space is respected on both sides, and the guest isn’t invited to just help himself to any object that may be sitting on the surface.) To get the monitors five feet ahead of where you're sitting if you're the clerk, they're going to have to be mounted out over the guest's head as he or she is registering.

So, we added some casework over and around that opening, to provide a housing for the video monitors (at the correct height, of course), some ‘eyeball’ lights to improve the lighting on the desk surface, and to provide a ‘sense of shelter’ for a registering guest; and ended up with an intimate, semi-private little registration alcove.

Notice how the floor of the atrium at the Hyatt Regency in Atlanta (the original skylighted atrium hotel) is relatively free of furniture, and has no restaurant or lounge seating at all? People like grand, imposing wide-open spaces, but they don't like sitting out exposed in them. They like something a little closer, overhead and around them, to shelter them. So most of the lobby seating, and all the seating in Sway, the ground floor restaurant and bar at the Hyatt Regency in Atlanta, is around the perimeter and underneath a single floor above, where people can sit and from which they can look out into the big atrium. 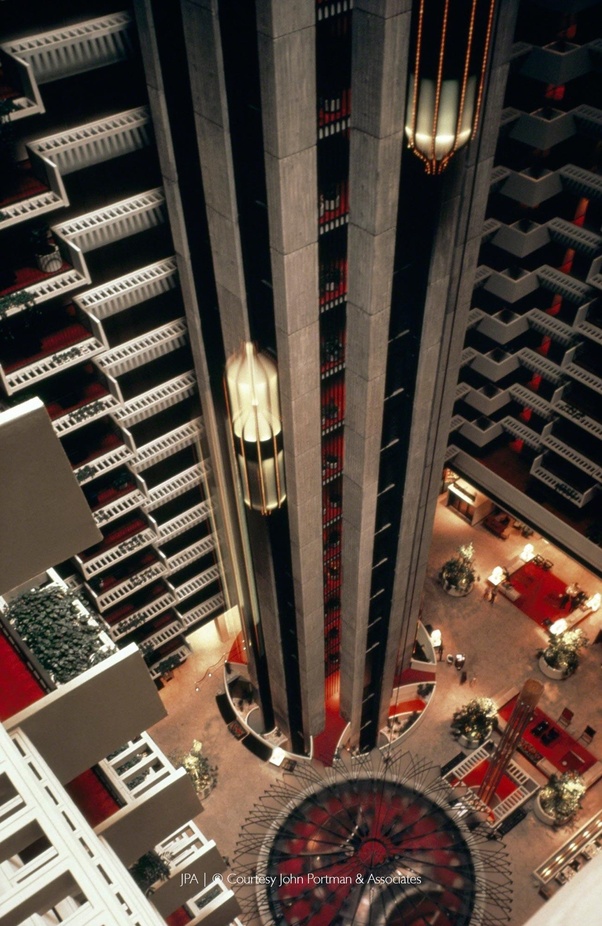 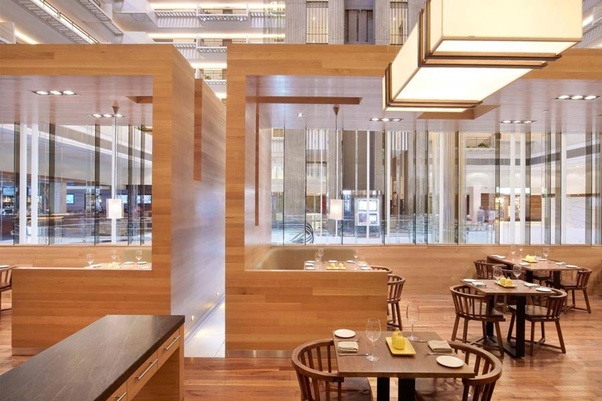 (The same psychological phenomenon gives us some idea why cats have a thing for boxes.) 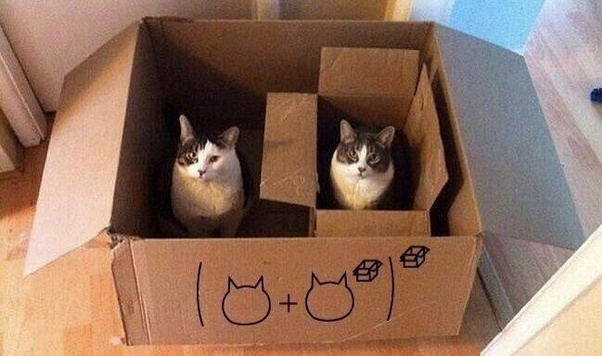 The enclosed area created by the need to put those security monitors overhead and a few feet ahead of the desk creates a ‘sheltered’ area of sorts for registering guests, and lining the enclosure with a sound-absorbent wallcover enhances privacy. 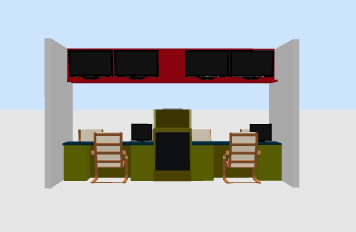 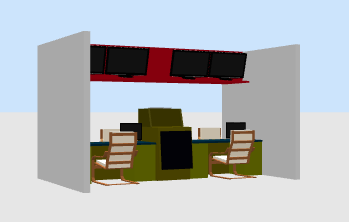 Comfortable seating for all and eye-level contact encourages the clerk to spend a little more time with each guest, so personal connections work a little better and we have a little more of a concierge function. (We still have to fuss at the clerks sometimes, mind your manners, when you’re sitting there alone and someone walks into the lobby, don’t just sit there, get to your feet to greet them. With the older design, you don’t have to bother standing up if you’re already standing up, and approaching guests don't notice it as badly if you're sitting on a tall stool; so clerks aren't in the habit of doing that and if they're seated, they forget. It takes some getting used to but in the end, most agree, it works better than the older design . . .)

We’re still working out the bugs of this design, but over time, most of our desks are going to look very similar to this wherever the brand reps from the franchise organizations crawl back under their leaf and stay out of the way.

Originally appeared on Quora
Posted by makeitrain at 7:17 PM